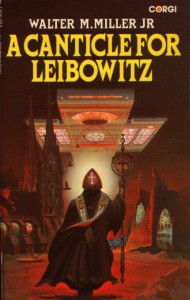 I've struggled to read this book for months, and I don't think it was because of the book, but because I was not in the right place or mind to read the book, honestly.

This is one of the older, classic post-apocalyptic novels, and I'm not sure why I didn't read it in high school, when I was in the throes of all of the classic PA/Dystopian books.    The book is comprised of three parts/stories, with each story taking place hundreds of years after the previous.

We start at an abbey set in the future, a future where we have quite literally bombed ourselves (collectively - humanity) back into the dark ages.  This abbey's mission is to preserve knowledge from before the "Deluge" (the fiery world-wide atomic war).    I found it fun, how, in this new world, knowledge is considered evil, because advanced knowledge and science "brought" the atomic wars.   It reminds me how computer ("thinking machines") are banned in Dune (for much the same reason).   A monk finds a fall-out shelter belonging to the Saint Leibowitz (the Abbey/order's founder) and moderate hi-jinks ensue.

Hundreds of years later, the story again takes place in the Abbey.  Civilization has advanced, we now have kingdoms appearing and warring with each other, and the relative of one of the leaders has come to the Abbey to study (he is obviously a scientist) and electricity begins.

And hundreds of years later, the story is again at the abbey, this time in the far future, where the space age reigns.   There are extra-planetary colonies, advance science, and again, nuclear war.   The monastery is still on a mission to preserve knowledge, and sends a colony ship off of the planet to preserve it from a likely annihilation.  The rest of the short story deals with the monastery's leader struggling with a nearby euthanasia camp and ends with his witness of what he thinks of as a miracle (a mutant, without Original Sin, giving him Communion).

The story has a lot of themes and tidbits that circulate through the three stories, and I found the book both depressing and darkly hilarious.    The idea that we are doomed to repeat ourselves, doomed to bomb ourselves back to near oblivion whenever given the chance is both sad, and something I could not quite dismiss.   There is enough realism in this book to make it very believable.     On the other hand, some of the humor involved - it's funny, but sadly/darkly funny.   The poor monk, Francis, dealing with his discovery of the fall-out shelter, the fact that the story involved gets blown out of proportion, and then is not believed cracked me up, but made me feel sorry for him at the same time

The last story - involving euthanasia and the abbot, was rough.  I grew up Catholic (though I'm not a believer), and I totally got where the abbot came from with his resistance to euthanasia, but the lack of humanity in opposing someone ending their suffering (I am pro-euthanasia), was a bit harsh.  Not that it mattered, with everyone dead.

But this book does what all of the best sci-fi does.  It takes ideas and beliefs and plays with them, winking and nodding, showing different sides and trying to make one think or understand on a different level, all while being scarily realistic, but not trying to read deep.  On the surface, it's a collection of three short stories about a monastery, underneath, it is so much more.