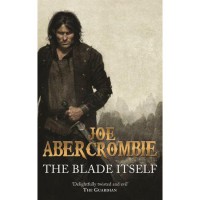 I think this is easily one of the best fantasy books I've read in a while.

Nice cast of characters with lots of fleshing and grey areas. Plenty of action, and plenty of big picture moments along with little picture stuff to flesh you the characters. There are fantastic heroes and antiheroes and plenty to love/hate about just about every character.

I can't wait to read the rest of the story.

I've been told that the trilogy reads better as one big book, and I'm inclined to believe that assessment - the first book did end rather abruptly. I already had the rest of the series, so I could just skate on to the next book if I wanted to, though I could see how others might be annoyed.
Tweet