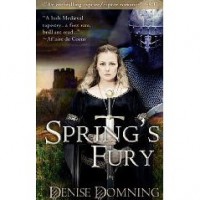 Series is still pretty solid, and I like this one just about as much as I did the first (so definitely better than the second)

I still prefer the sex scenes way steamier, but hey, take what you can get. I liked the relationship between the two main characters better than the last book by quite a bit. I do like that this book was more focused on the day to day medieval manor life than the actual conflict with the baddy.

It would be best to read the first book in the series (Winter's Heat will give you the back story to the two characters, plus this pretty much starts soon after the other one ends).

Nicola of Ashby has sworn to avenge her father's death and the destruction of Ashby by Gilliam Fitzhenry. Her liege lord has handed her in marriage to his brother because the man was insane enough to ask for the hoyden. He just wants a partner to help rebuild the village, but sparks fly, yadda yadda.

I liked both characters. They had issues they had to get through, but not as much as the usual tropes. I could have lived with a little less of the 'romantic' sexual assaults, but at least the main hero drew the line at rape (small favors?).

The book was humorous and fun as well, and I loved the characters of Jos and Gilliam.
Tweet