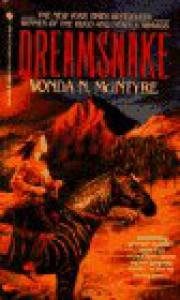 Snake is a healer on a post-apocalyptic Earth, off on her proving tour through the desert-lands, where healers typically do not travel. Along the way she has a mishap and she must then travel (first to her home, but then to a big City) do her best to right what has happened. Along the way she has a greater journey to a discovery that will (probably) forever benefit the healers in the future, and also makes personal gains.

The book is a bit dated, with flavors of the time period when it was written. Free sexuality (and total internal birth control)and less patriarchal norms is something that was probably more interesting at the time. However, it's still a good novel with a good story; McIntyre shows that a sci-fi fantasy novel doesn't need to be 700 pages and describe everything in painful detail to be good.

I like that in this post-apocalyptic world, there's a mix of primitive tribalism and hard-living survival right along with genetic manipulation and biotechnology that's commonplace. You get a glimpse of a city that is technologically advanced, but forbidden to "outsiders" and you hear of off-worlders (whether they are pre-apocalypse terrans that made it to the stars or aliens is unclear), so the world is varied and interesting.

I guess some people would want to have a lot of their questions answered (what happened to Earth to cause the nuclear war that has so scarred the land, how have these different people formed, what's with the domes and the "alien" life forms in them, what's with the City, what's with the offworlders, how did the technology become dispersed, what was the pre-war/nuclear world like, etc.), but I quite enjoyed the glimpse into this world as an observer with Snake on her journey.