The Heretic Queen: A Novel 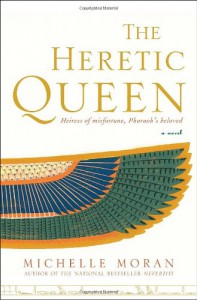 I really wanted to like this book more than Nefertiti, and when I first started reading it, I thought I might.

Unfortunately, the book devolves pretty quickly into harem intrigue and cat fighting. For historical personages that are supposed to be so smart and accomplished, there was a whole lot of stupidity in this book.

The book is centered around Nefertari, in this book, the niece of the heretic pharoah-queen Nefertiti. Two sisters, who are high priestesses for different temples (and sisters to the old pharoah, aunts to the new), have picked two contenders for Ramses II's chief wife/queen of Egypt. The Not-as-pretty, but very well accomplished and intelligent Nefertari (also, relative of the previous heretic pharoahs) and the Gorgeous, but dumb as a stump harpy, Iset. We're to believe that Ramses was head over heels for Nefertari, but couldn't see through his aunt's or Iset's shenanigans and was a general dolt.

I couldn't suspend my disbelief long enough to buy the storylines going on, with the lying and intrigue. I have a hard time believing most of the soap-opera-esque shenanigans.

I appreciate that Moran, herself, has said that first and foremost this is a work of fiction, because it is. She took a lot of liberties with the history, but she cops to it, which always earns kudos from me.

This is her second book. I've read all (currently - 4, though a fifth is about to come out) and I will say that her later works are much better written and more interesting. So I would not recommend Nefertiti or The Heretic Queen, unless you wanted to read all of her works.

One thing about other reviews that I thought I would address is that some people seem upset about the "graphic sex" and having read reviews that mention it, I was curious how bad it was... the very few sex scenes present were incredibly mild, and I don't think they would have registered without me looking for them.

Cassandra Campbell, the narrator for the audiobook, does a spectacular job for this novel (as she did for Nefertiti) and she does make the book a bit more bearable.

I do like Moran's writing, just not this book (or it's predecessor). So yeah, I would easily call this book "OK" and not much more than that.
Tweet