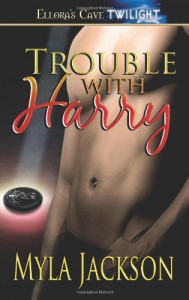 This book was OK. The male characters were much more likeable than the female lead. Another one of those "woe is me, men are so scary" virgins that, of course, turns a 180 and decides to overcome what is (presumably) decades of neglect and (verbal/emotional) abuse to become some sex-ay woman.

So Modern! (beat-down) Independent! Woman! Finds a genie in a bottle with unlimited wishes. And she's stupid about the wishes. The genie is some guy from the 20s that got caught in the bottle. Cue old-fashioned chivalric man falling for his Sexy! Modern! Independent! Woman! And the stone giving the power to the bottle wielder is awesome and bad people want it. Cue conflict.

The actual writing? Some of the sex scenes were OK, some were bad, but the language needed work. It was neither awesome nor hilariously bad, though at one point, "she wanted him to mount her, like a male dog humping a bitch." (sexy!)

Meh. It ends on a cliff-hanger, and I don't care enough to read further unless Amazon makes the sequels free, too.
Tweet