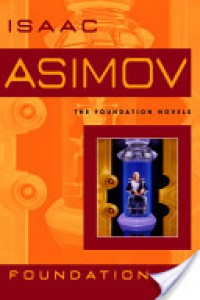 I am completely baffled why this book is so incredibly popular. I liked that it was more intellectual, I like the "behind the scenes" forming the foundation of a future empire, but it was boring.

It's a set of short stories thrown together in the same book because they all (ostensibly) are important to the formation of a new empire during a thousand year dark age. It was mildly interesting in that they set up Hari Seldon as some uber-statistically minded predictor of the future. But in the end, it's a bunch of guys talking about what's going on. There's very little action, which would have been ok, if it didn't feel incredibly dated.

I also admit that I was looking for a female character. ANY female character, and when I got her, I was really disappointed. She's just a harpy that clawed her way into her marriage because of some political alliance (her dad, important, her husband, some governmental authority on another planet). I understand the book is old, and before feminist sensibilities, but really, I expected better.

I understand that this is just the beginning of an epic series that spans a jaw dropping time line (as far as books are concerned), and I know that Asimov is considered a grand-daddy of the sci fi genre, but I just can't bother to care about the rest of the series.
Tweet