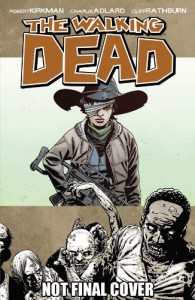 So just to recap:
We have 3 areas: Alexandria (where our people hang), Hilltop (another "safe" compound), the Saviors' compound, and the "Kingdom" (which is as cracked out as it sounds).

Carl takes it upon himself to attack the Saviors, which is rather ballsy for our favorite maturing sociopath.  He gets caught, but not punished, by Negan, who takes him on a tour of the Saviors' compound.   Negan is just as much of a sociopath as ever, and yet we're supposed to believe he's "reasonable" by the end of the volume.  Eh.

So basically, everyone in Alexandria is trying to figure out whether to stay or go, Rick is pretending to cave to Negan to hatch a master plan, which he cocks up when he loses his shit over Carl,   Jesus is running around trying to help with Rick's (original) plan and recruit the Kingdom, and everyone is, of course, at odds and trying to survive.

I enjoyed this one a little less only because I had forgotten half of the characters and I don't really find the drawings much help (the art makes a lot of the guys look the same), but there was forward plot with story and things are happening (what!  Ammunitions are being made!  and Go! Andrea!).