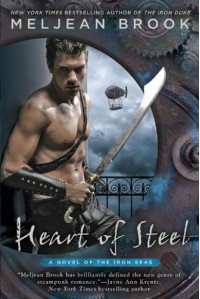 4 stars for the worldbuilding - it's fantastic

Worldbuilding is something I hold in highest regard, and Meljean Brook has it down to a science in this series.   It's an odd steampunky world, mixed with zombies, nano-tech, airships (and sea ships), pirates and politicos.  There are still different countries and political systems in play (it's based on our past political systems, back in the day).

This book (the second in the series) actually has Lady Corsair as the main character/protag (well, at least as a duet with Archimedes Fox).  She was the character in the first book I liked the most, so I was happy that she was featured in the next novel.

Archimedes Fox, adventurer (and main character in his sister's very popular books), has a secret past and a debt to pay, and is determined to fall in love with the mysterious and amazing Lady Corsair (that he met in the first book).

Lady Corsair has a debt to pay after some shenanigans involving her own ship, and she partners up with Archimedes to try to engage in some heists and some political intrigue.

Also romance and other stuff along the way.   This is definitely a world and character driven romance, not erotica at all (with just a couple of kinda-steamy brief scenes).

While I want to be disappointed in the lack of smuttery, I adore the world building and have been completely hooked by this series.