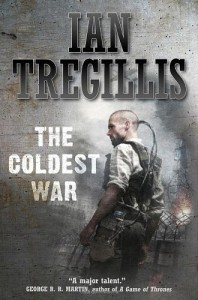 This is the second book in Tregillis's YA-Alternative timeline Milkweed trilogy.

Instead of picking up right after the events of the first book, we pick up about 20 years later.   Everything has gone to hell -

In this timeline, the USSR pretty much has all of continental Europe under control and is waging a bitter cold-war with England.  The US is busy being super-isolationist (and had never entered the war).   The Soviets captured Gretel and Klaus at the end of the war with Germany, and are now running their own super-power/Xmen division.

In England, Marsh's life has fallen apart (with a disastrous marriage to boot), Will is being an utter ass (I seriously hate his sanctimonious hypocrisy).  Everyone (who's still alive) gets back together for a fantastic reunion of Soviet busting fun when Klaus and Gretel make it back to England to defect.

Klaus, I think, is the only one I really care for, or at least, to me, is the only sympathetic character in the book.  We find out that Gretel isn't just a sociopath, but a sociopath with an end game, and everyone else just seems to be limping through their lives, trying to hold what little they still have together.

But still, everything is super gritty, war (and life) is hell, and at no point do you feel happy during this book.

I love that even though it's a middle book in the trilogy, it doesn't suffer from middle-book-itis at all.  It's fast paced, just as solid as the first work (if not more), and is very tightly and smartly written.