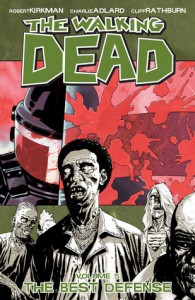 I upgraded from 2 stars... I'm not real thrilled with a few scenes from the graphic novel, but they did introduce new plots, people, etc, and I always appreciate forward movement.

Our intrepid little heroes see something, go out to investigate and find a settlement not too far away. And we're introduced to the Governor and his rather fucked up society (of course, it's not quite that black and white, but him being fucked up is rather solidly colored, so he's not much more than a two dimensional evil character - he even has a goatee to prove it!).