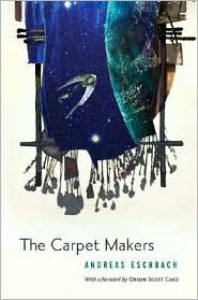 This book has a weird premise, which is why I bought it to begin with. On a planet, there is an entire system set up around one produced good: Carpets. Carpet-Makers are the most honored members of society. They spend their entire lives making a carpet out of human hair. They use the hair of their wives and daughters. They’re the only people in society allowed to have multiple wives - so they can have multiple colors from those wives as well as producing more colors/hair through their daughters. They are allowed one son, to continue the carpet making tradition. They toil away at this task day and night, every day; the work is so intricate that it takes their entire lives to produce one carpet. When the carpet is completed, it is sold, and the price of that hair carpet sets up the next generation (no really, it’s enough money for the family to live off on their entire lives), with the son of the carpet maker marrying and starting his carpet, to toil at until his son is ready to marry and begin the cycle all over again. That is their entire lives. And the economy and society of the entire planet revolves around these precious hair carpets. This is how it has been for untold generations.

They make these carpets to honor their God-Emperor, or at least that’s what they believe/know to be true. These carpets are supposedly shipped off world to adorn the palace of this immortal emperor who has all power and has ruled for however-many millenia.

And then it all changes. And the mystery of the hair carpets is discovered.

This book was interesting - not just in the actual story, but the way it is told. It has amazing writing - each chapter is a short story (so the book is basically a series of short stories) with a one or two (or whatever) character/thread link carrying you from one to the next. It’s usually a pretty tenuous link, but the book is about the story, about human nature - not the characters themselves.

Actually, this whole book pretty much kills me. Eschbach gets more said, more done, more story told, and more emotions out of my gut in 10-15 pages than most authors can get in whole trilogies. It’s a very short book, and it covers a story that takes place over 80,000 years and it’s absolutely amazing.
Tweet