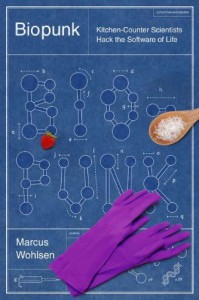 I received this book from Goodreads First Reads for free.

I think it's absolutely hilarious that I won this book, because it's about people deciding to do bio-hacking in their own space and time, rejecting the idea that good science has to come from institutionalized academia or biotech companies; I've worked in both.

I initially thought the book would just be a bunch of case studies of people doing wacky experiments in their kitchens in their spare time and I was pleasantly surprised to find that this book is so much more than that. There are several do it yourselfers in the book, and Wohlsen does a great job of describing what they're doing, the science behind it and /why/ they're doing it. Even better, he goes into some of the politics and rigidity presented by academic institutions and biotech corporations and how and why these individuals are working beyond those restrictions. It also deals with the potential consequences and challenges that come with this type of citizen science.

I think he did a great job of describing the motivations behind a lot of the bio-punk/hack/do it yourself movement. Some of it is self-motivated (trying to discover whether or not you have the potential for a deadly disease in your genes without spending the thousands of dollars for a test the insurance companies don't want to pay for) or altruistic (teaching the community about science, or trying to find an inexpensive way to help poor, rural areas detect/differentiate diseases). The ethics and thought processes behind this DIY crowd is quite similar to the rest of the growing DIY movement, but there are more serious ramifications when tinkering with biological systems (especially with fears of bioterrorism abounding) and I think he does do a good job describing them.

The bio-punk/hack movement is intrinsically anti-establishment, and I appreciate that Wohlsen presents the bio-hack vs institutional argument fairly balanced. At first I worried that the book would be very biased against traditional research, but it wasn't and I also feel he could not go into the positives of research in bigger/better funded institutions without removing the focus of the book from biopunks.

What I really enjoyed about the book (and why this book earned an extra star) is that the science in it is fairly solid. As a biologist, I get very tired of uneducated hack-writers making biology (or any science, really) incredibly wrong, either skipping explanations at all or making arguments/explanations wildly inaccurate. The science in this book was not 100% perfect, but it was pretty damn close, and for the lay person, it's probably more than good enough.

I liked this book, it's easy to read, immensely interesting and gratifying if you are a biologist interested in a different side of science. It covers the whole gamut from how someone can build something in their kitchen, how they can fund it, and the dangers and/or inherent risks of doing DIY science. It also debunks hysterical fears and gives a realistic view of what people can really accomplish and how natural curiosity and a drive to do better can turn anyone into a scientist.